Bezauer WirtschaftsSchulen > Aktuell > HAK > On the Brink – Vienna’s English : TheatrePerformance of the play in Andelsbuch

On the Brink – Vienna’s English : TheatrePerformance of the play in Andelsbuch 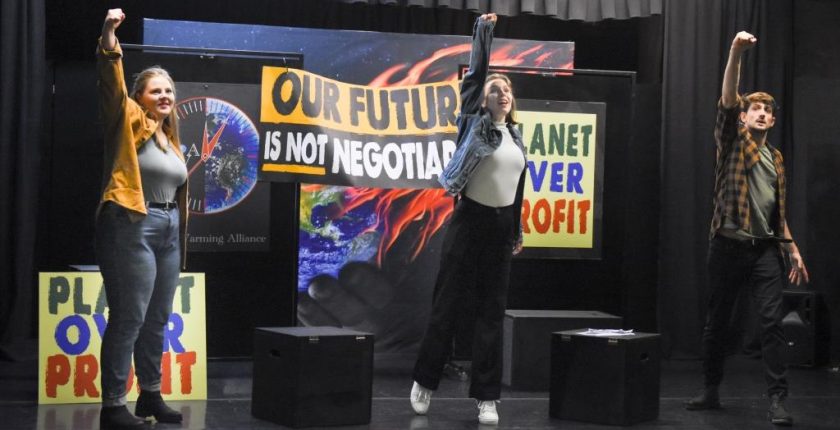 “The clock is ticking. I can hear it counting down the hours, the minutes and the seconds. The sound is the cracking of ice. It´s the wind blowing across a desert. It´s the sound of a river drying up. It´s the sound of death. I know it could still be stopped. All it would take is a word, an action.”

‘On the Brink’ is a modern version of Sophocles’ drama ‘Antigone’. It is set in the fictional Republic of Trusavia. The CEO of the biggest gas and oil company and his niece Tiggy have just launched a new community program, but it turns out to be only a marketing strategy.

In this world, dominated by climate change, serious actions need to be taken. This is the firm belief of young climate activists, who demonstrate against the oil company. After some heated discussions, Tiggy changes her opinion and turns against her family’s company. Together with her, the climate activists start to become more radical and dangerous. At this point, the play asks one important question: Which end justifies the means to solve the problem of climate change?

The performance of ‘On the Brink’ started very interestingly and had an engaging storyline. The ending is rather abrupt, but also surprising and definitely not obvious. The cast did an amazing job and their acting was great. Furthermore, they spoke a very understandable language for non-native speakers. To summarise, ‘On the Brink’ was a very interesting performance with great actors, which the following classes enjoyed a lot: III. HAK, IV. HAK, IV. HLT and V. HLT.